The Naxal Belt is the point at which ossification dissolves, the acceptance of age-old naturalization of existing conditions inverts, the "tipping point", the limit experience, the no-experience to counter the ubiquitous homogenization of experience, the detournement, the prankster, the extreme rejectionist, the un-historicized, the unbridgeable synapse, the Phantom Limb, the court jester, the bitter faggot, that which is illegible according to the parameters of existing discourses. The Naxal Belt is noise, not sound; it is bent, not straight; it is no-sense, not logic; it is broken, not whole; it is ugly, not beautiful. It is in love with death. Death is its mother, father, lover, teacher, confidant, and best friend. Death is there when it wakes up in the morning, and leaves its tenderest kiss. Death discolors its arms, hardens its neck, seeps into its liver, collapses its lungs, its rotting rancid brain, convulsing in futility and truths returned for refunds without receipt. The Naxal Belt is unassimilable surplus, the paradox of a language of that which cannot be uttered, cannot be represented, which receives no representation.
Home
Subscribe to: Posts (Atom)

The Naxal Belt at Homesession, Barcelona

Loud Objects at the Naxal Belt 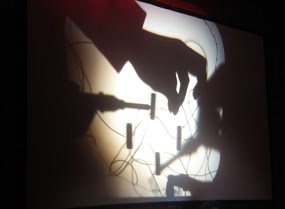 Galeria Perdida at the Naxal Belt

The Naxal Belt is a non-place, no-place, a future without history, alienation, dialectics or time. It is located at 175 Jefferson Street between Wilson and Central in Bushwick, Brooklyn NYC. Between 2009-2012 it held exhibitions three times a year in conjunction with Arts in Bushwick: Bushwick Open Studios (BOS), SITE Festival, and BETA Spaces (Bushwick Exhibition Triangle of Alternative Spaces) and since 2012 has done projects in Barcelona, Copenhagen, and Berlin. Contact: naxalbelt@gmail.com.